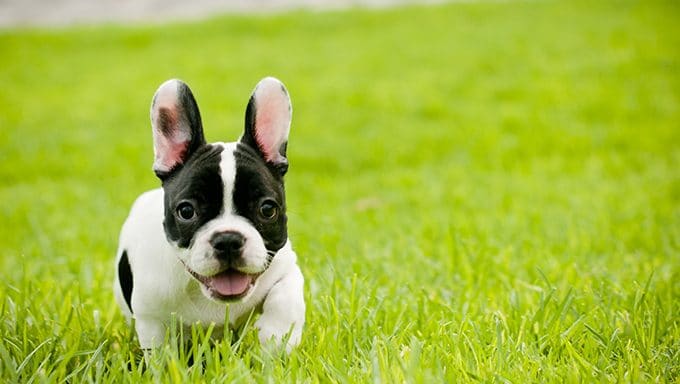 Oh, those grumpy, smooshed faces! And those alert ears! Aren’t French Bulldog puppies just the cutest? Frenchies are making a big comeback popularity-wise, climbing up into the top five most popular dog breeds in the United States in recent years.

Remember, you can find just about any breed of dog, including French Bulldogs, at shelters or breed-specific rescues. You can even check out DogTime’s adoption page that lets you search for adoptable dogs near you by breed. Adopt! Don’t shop!

If you’re thinking about adopting and bringing a goofy, slobbering French Bulldog puppy home, here are a few facts you should know. French Bulldog puppies don’t just bark when they’re excited; they have their own intricate language made up of whines, yips, yawns, and grunts to communicate exactly what’s on their minds.

If you bring one of these puppies home, you might learn to understand their adorable language before they start to learn your human words.

They’re Made To Be Your Number One Companion Despite their name, French Bulldogs were actually bred in England to be companion animals.

They don’t need a massive amount of exercise and get along well with pretty much any child, other animal, or adult human they’re socialized with. This may not be apparent, as French Bulldogs take to training slowly, but they do love you.

They Can Have Some Breathing Issues As adorable as those smooshed faces are, the French Bulldog is a brachycephalic breed, meaning they have shorter snouts than other dogs. This can lead to breathing issues, especially when it comes to swimming or flying in an airplane.

If you want to take your Frenchie for a swim, be sure to have them geared up with some puppy floaties, and stay close to them, as they literally cannot keep their snout — or the rest of their body — above water.

Some airlines will not let brachycephalic breeds fly since being in a small, hot area under a lot of stress can make breathing very difficult for these dogs and can even be fatal. As fancy as French Bulldogs are, the jet-set lifestyle was not made for them.

They May Have Some Issues Coming From… The Other End Stout and sturdy, French Bulldogs have a way of emitting a certain — aroma, let’s say. Frenchies have something of a reputation not only of breathing issues, but also some gas issues.

Grab some non-toxic air fresheners and open up some windows if you think a French Bulldog is the right puppy for you.

They Can Be Champion Couch Potatoes And Incredibly Playful French Bulldog puppies can grow very accustomed to living in the lap of luxury. Since they’re a companion breed, nothing pleases them more than hanging out next to you.

Just because they can be a little lazy doesn’t mean they don’t love to play, though. French Bulldogs can be incredibly silly and playful.

Remember, you can find just about any breed of dog you are looking for at a shelter or rescue!

Would you adopt a French Bulldog puppy? Do you know any other interesting facts about these pooches? Let us know in the comments below!